What are hard forks and soft forks 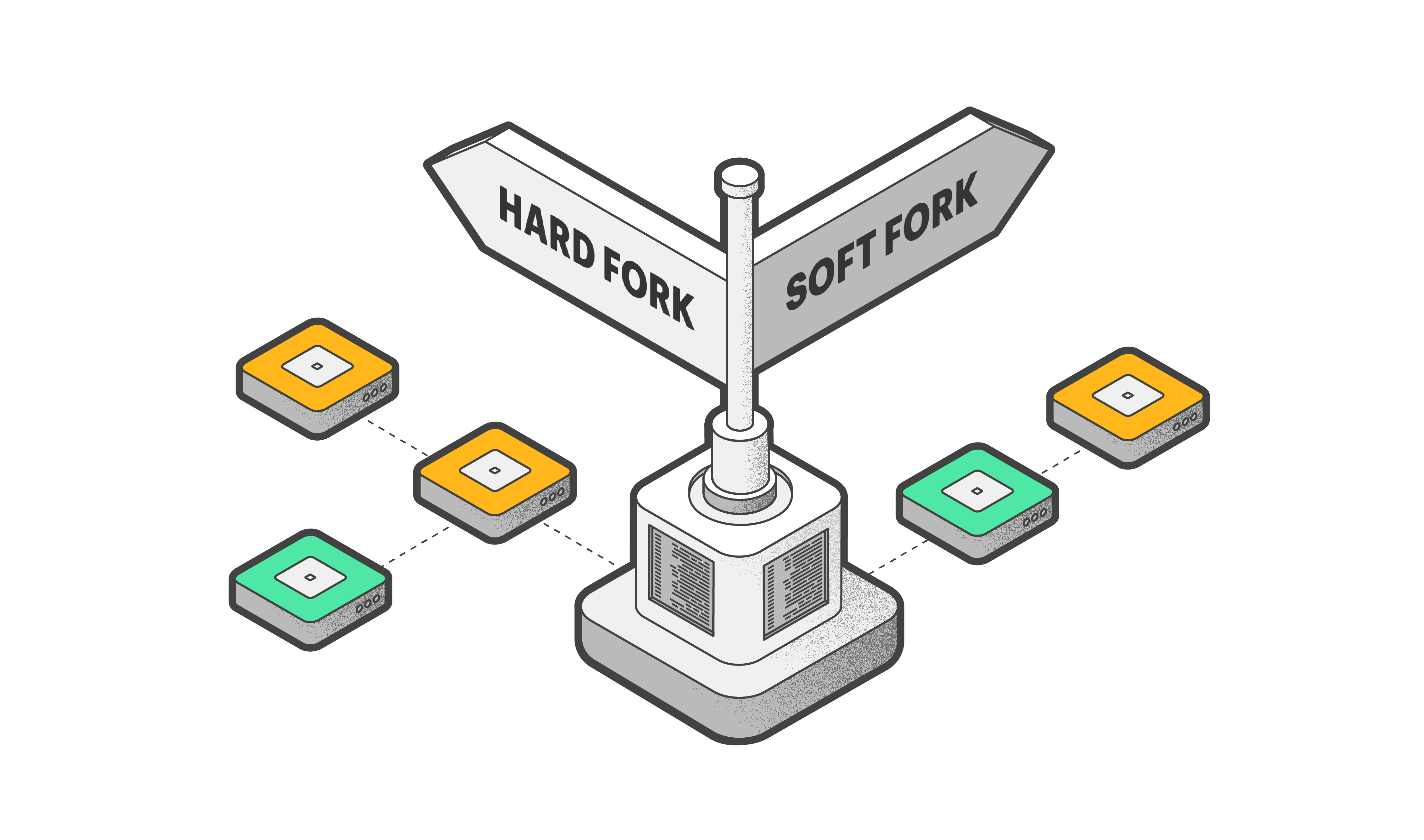 Blockchain developers often claim that forks are needed to improve blockchain technology and optimize the network. The most common changes are:

Sometimes, the blockchain developers can have different views on the project updating, they can even have serious disagreements within the blockchain project community. For these reasons a fork can also emerge.

Forks are divided into hard fork and soft fork depending on the scale of the modification of the blockchain protocol.

The blockchain code can be altered and modified to avoid bugs and vulnerabilities, to add new updates and features.

When those alterations are significant, they are called hard fork. A parallel copy of the protocol is generated, but with the addition of new code.

Hard fork modifications allow blockchain nodes to add changes that contradict the rules of operation of previous nodes. Accordingly, the new nodes can only work with the nodes using the new version of the blockchain. As the result, the blockchain completely migrates to the new protocol or splits into two separate networks: the old one has the old rules and the new one has the new rules.

Moreover, all of the coins of that blockchain sort of split, as a new blockchain with a new coin appears, with the same balances on the same addresses as the old blockchain. In this case, the market value of the original coin is usually divided into unequal shares: the less popular coin resulting from the fork is worth less than the more popular original coin.  It helps to maintain the current blockchain protocol and avoid update failures.

To put it simply: a hard fork used to make serious alterations to the blockchain operations, causing blockchain split into two separate networks.

Participants in a hard fork

Generally, a hard fork results from prolonged discussions leading to a consensus in the blockchain project community. Initially, a proposal is put forward, then it is finalized, tested, and finally implemented.
When an update is crucial and affects not only technical changes, but, for example, changes the tokenomics of a cryptocurrency project, the discussion can go beyond the blockchain development community.

For example, the Ethereum blockchain has an entire system to improve the network (Ethereum Improvement Proposal).

To activate a hard fork, you need to write a new programming code, but a majority of participants also need to agree on that. Besides blockchain developers, network validators are also participating. After all, it is up to them to make the blockchain work, and if they do not agree with the developers' proposed update, they simply will not migrate their compute nodes to it.

It is important to understand that the blockchain protocol cannot be changed without community consent, as it is not only the network that is decentralized, but also the software layer.

If a majority of blockchain project participants agree with the update, the network follows the new protocol. But without unanimous consent, some nodes move to the new version of the blockchain, while others work according to the old rules. The result is that the blockchain splits into two chains.

A soft fork is a backward-compatible upgrade, meaning that the upgraded nodes can still communicate with the non-upgraded ones.

Backward compatibility provides that old transactions can be recognized by new nodes. Complying with the new protocol requires only part of validators to be updated, but not all nodes as in a hard fork.

To put it simply: a soft fork is an improvement of the blockchain's performance, with the old and new protocols functioning harmoniously in the same network.

Soft forks do not result in separation of the blockchain into autonomous networks, the release of new coins, or any other fundamental changes.
Soft forks intend to solve the following issues:

As a result of soft fork, network participants need to update their software, but it is not that necessary. It is possible to work under the old rules as well.

Forks are common things within any popular blockchain. Crypto users can benefit from learning about forks and increase their investment and trading income.