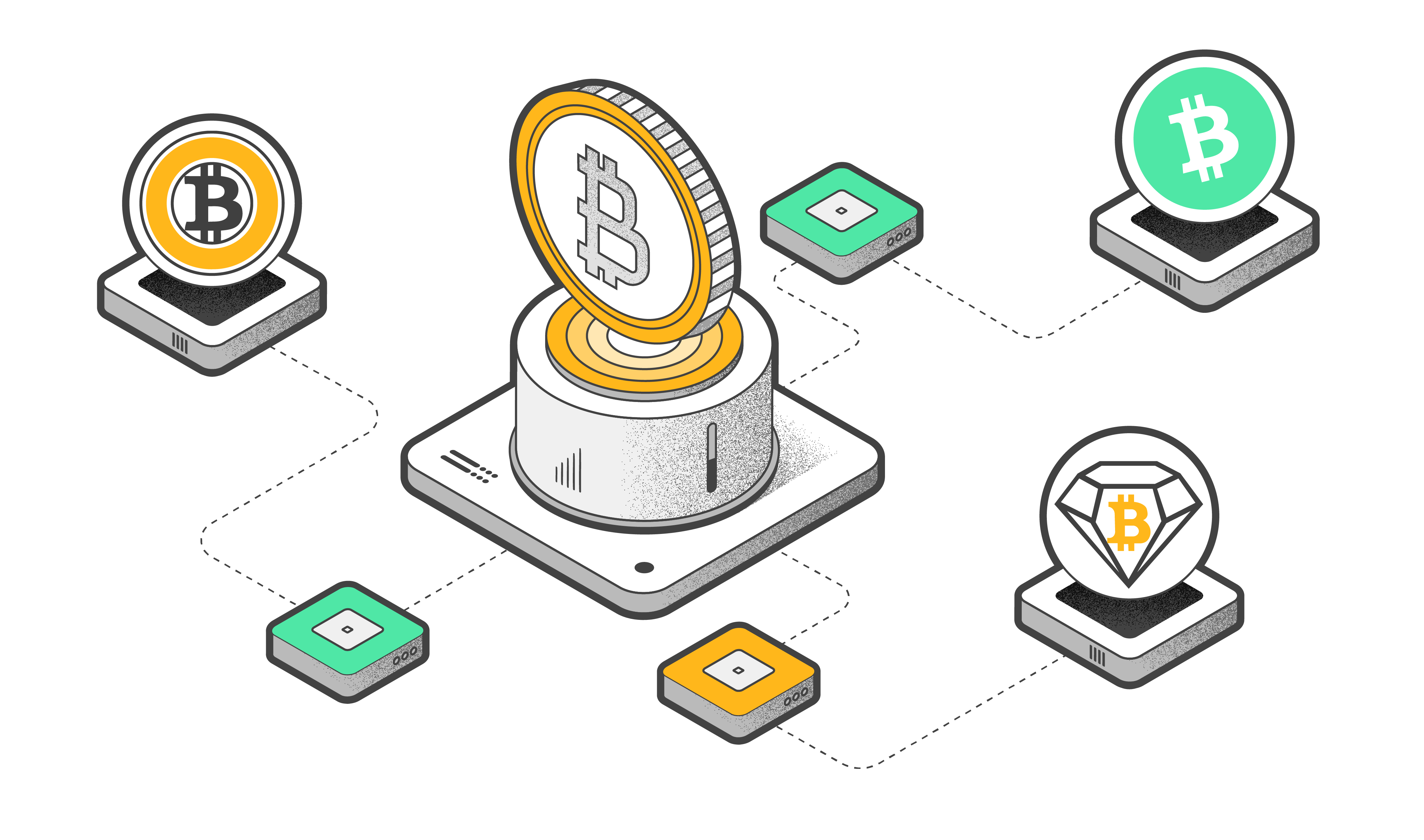 Bitcoin is the first financial blockchain project, a decentralized peer-to-peer payment system with the coin of the same name. While it is a very sophisticated technology, however, certain issues were discovered later: low scalability, low performance, expensive commission fees, etc.

To improve the processes, forks are designed: forks are changes in the blockchain software code in order to improve the network, and often to issue new coins.

What are bitcoin forks and why do we need them

So, a fork is a certain adjustment to a fundamental blockchain code, such as changing the rules of the existing protocol algorithms.

The most common reasons for forks:

Bitcoin forks can also arise from any serious disagreement in the cryptocurrency community about how the blockchain shall work. A fork emerges when a part of the community supports changes to the blockchain and others do not. Without a consensus, the blockchain branches off, creating two independent networks.

Forks are different in nature, they can be planned or spontaneous. Forks are divided into hard forks and soft forks.

In the bitcoin community, hard forks are quite popular, primarily because new coins can be obtained for free.

Since the first bitcoin block was generated in 2009, the network has experienced many forks, about a dozen new coins and over a hundred alternative blockchain projects emerges. However, only a few of them have any value whatsoever.

This is one of the most famous forks of bitcoin. It emerged on August 1, 2017 after the disputes in the bitcoin community: some supported implementation of the SegWit2x protocol and the increase of the block size to 2 Mb, while others did not agree on that. A part of the community decided not to change the algorithms, but to increase the block size to 8 Mb to solve the problem of BTC scalability, which can not handle more than 7 transactions/sec.

In addition to the exchange rate (61 transactions/sec) in Bitcoin Cash, the network commission fee was significantly reduced.

After the chain split, BTC owners who wanted to switch to the new blockchain received amounts in BCH equivalent to what they held in BTC into their accounts.

The fork of this fork appeared in November 2018, resulting in Bitcoin Satoshi Vision (BSV).

Another popular Bitcoin fork was created in October 2017 and resulted in the Bitcoin Gold (BTG). The purpose of this fork was to achieve even more decentralization, since at the time most of the nodes were controlled by huge mining pools in China.
To do this, the mining algorithm was altered for not only ASICs owners (specialized devices) could participate in it, but also owners of regular GPUs (graphics processing units).

In 2018 and 2020 51% attack occurred on Bitcoin Gold, but the network developers were able to fix vulnerabilities in both cases and saved BTG.

A 51% attack is an attack on a cryptocurrency blockchain by a group of miners who own 51% of  network's mining hash rate. The attack results in the inability of others to find blocks, in double spending of coins, criminals’ accumulating all block rewards and transaction commissions, preventing transaction confirmation, and in the main coin forks.

Another fork of the original BTC emerged in November 2017. The main goal of this modification was to increase privacy and reduce transaction costs. SHA-256 algorithm was used for it, and the total issue of crypto was increased tenfold. Besides, the block size was increased to 8 Mb to process more transactions.

SHA-256 algorithm is a cryptographic hashing algorithm used for data encryption. It can be used to convert any amount of information into 256-bit output data, i.e. into a unique unidirectional hash which cannot be decrypted back to the original data.

Various forks and bitcoin clones exist. All of them aimed to improve the original bitcoin. However they failed, considering their unpopularity and small capitalization. Such blockchain projects include Bitcoin Atom, Bitcoin Interest, Bitcoin Private, Lightning Bitcoin, BitcoinX, United Bitcoin, Super Bitcoin and others.

The most popular Bitcoin soft forks

Soft forks are also a common thing for bitcoin. But, there is only one worth mentioning.

This is an update to the bitcoin protocol fixing transaction malleability issues.

To solve this problem, an update was proposed to move transaction signatures outside of the main block. This offloaded the blocks considerably, and fixed malleability issues, because signatures no longer affected their hash identifiers.

The block size limit was also increased, allowing more transactions into each block. This also helped to increase the capacity of the network by 2 times. Transactions were confirmed faster, and fees were reduced.

On the Internet, even in the same Wikipedia, you can find the definition of Litecoin as a fork of Bitcoin. But it is not true. The fact Litecoin was created based on the same technology as Bitcoin does not make it a fork of the latter. Litecoin runs on its own original blockchain and it is an independent crypto. That’s why it is not a fork as a fork is a branch of a blockchain.

The same misconception often applies to other blockchain projects based on Bitcoin network technology: Namecoin, Primecoin, and others.